The Fight screen is a feature where monsters are fought in order to gain gold and Cards. Monsters can be damaged passively through idle damage or actively through skills. Many other features in the game tie into Fighting, making it easier to progress as everything levels up.

Fighting is split into twelve unique zones, all having a long series of monsters. Each monster in these series needs to be defeated a certain amount of times before the next, stronger monster can be battled. At the end of each zone sits a Keymaster, which can be defeated to unlock the next zone and various Ascension perks. Afterwards, cleared zones can be revisited in order to defeat Glitches which offer easier encounters, but less gold rewards compared to monsters in more difficult zones.

Clearing Grasslands is an important milestone that unlocks Ascension for your current run, and permanently unlocks the Portal, Raids, Blue Perk Tree and also Limbo once it's accessed for the first time. Afterwards, clearing Desert will unlock Crusades and the Gray Perk Tree. 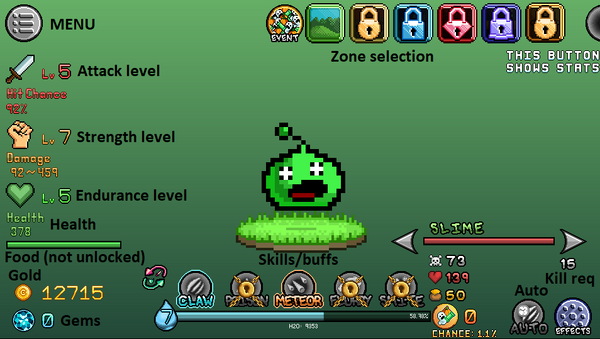 Only time is lost when defeated in the Fight screen; all progression, gold, and levels remain intact when a player visits Death's screen. Here the player will be healed incrementally until they are fully revived in a short period of time. Additionally, skills may be used on this screen, but the Heal skill does not expedite the revival process.

Coincidentally, Death's Reaper has a health bar and using skills can eventually kill it. However, in order to be rewarded, this must be done before the player is revived, making it a difficult feat until many levels later.

Abilities and buffs can be unlocked through Perks. The damage or duration of a skill can be enhanced by upgrading their respective perks, equipping certain Cards and Tinkering equipment. Additionally, the cooldown can be reduced by the Excellent Timing Ascension Perk after clearing the The Mist. There's also an option to autocast skills, which can be unlocked and upgraded through the Gift Shop in Raids.

There are 100 monsters in each zone's series (Vault is the exception with 51) but only a portion of them need to be killed to clear a zone. The following table shows statistics per zone and each zone can be clicked on to get zone-specific information on the monsters in them.

Fighting progress is improved by Training levels, Smithing trinkets, equipped Cards, Tinkering gear, several Rifts, and bonuses from Perks and Ascension. Since there are too many sources for damage and attack speed bonuses to create a short list, here are unique and notable bonuses instead:

Food is a passive regenerating HP and Shield source that improves survivability against more difficult monsters.

Retrieved from "https://idle-skilling.fandom.com/wiki/Fight?oldid=5308"
Community content is available under CC-BY-SA unless otherwise noted.