There are four secrets that are unlocked by performing various feats in the game. Once unlocked, you visit the secret areas indefinitely from the Portal screen. Usually, the secret areas offer a quest chain with three tasks each, requiring resources from varying levels of Mining and Fishing. Completing these quests awards permanent bonuses. Secrets should not be seen has an optional things because they give huge bonuses to progress in the game.

At level 40 Smithing, you're able to craft Enigmatic Boosters which improve Secret bonuses by +2% per level.

When you die in Fighting or Raids, you are met by Death who has 10M health points. 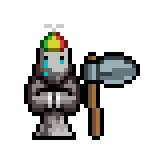 Idle attacks do not work, so you have about 10 seconds to defeat Death with only your active skills. Once you've killed Death, you're transferred to Death's throne room, where you meet Death's orphaned son. When you click on the child to attempt to console it, you'll be asked to do the following:

After completing these quests, you find you were unable to properly console the orphan but are awarded a blessing.

In the Smithing screen, clicking on the Blacksmith prompts you to find a pill for his fever. 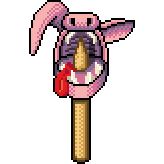 At level 20 in Smithing, you gain access to a recipe to craft Blacksmith's Pills. You only need one, but also need level 36 Fishing to gather the necessary materials (You can also slide the pill from the selection screen to the blacksmith to give it to him without buying it). Once you've made the pill, drag it over to the Blacksmith and you'll share his fevered dream about a pig head that's been defiled on a stake. Surprisingly, even in death, the pig has final wishes you're tasked with completing: Fulfill the last requests of the dead pig to finish this secret

Finishing this secret will award you with +40% more AP on every Ascension.

This secret cannot be completed until you reached some step of the Defiled Pig's Head secret.

The fisherman on the Fishing Docks can be seen swinging his legs to some unheard tune. As it turns out, he used to own a Gramophone that has since been broken, its pieces lost throughout the game.

Once you've collected all the pieces, head back to the Fishing Docks to reassemble the Gramophone. Clicking on it now plays music which will attract a rather large "fish", but it will only show itself once you've caught a Dollar Fish and clicked on it (while it's on the hook), which requires 60 Fishing. When this action is taken, the screen will fade to black and it's discovered the large fish has swallowed the fisherman, injuring him in the process. You're now tasked with finding resources to help the man recover: 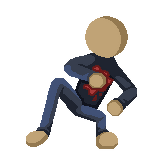 As it turns out, even after helping the dying man, he isn't able to recover from the gaping hole in his chest. Nevertheless, his gratefulness grants you a blessing.

This secret cannot be completed until you reached some step of the Defiled Pig's Head secret, the Death's son secret and finished the Fisherman's Folly secret.

This secret should be completed as soon as possible as it's bonus increased slowly after being finished.

On the Portal screen, there are ten empty placeholders for small orbs that are found by clicking hidden squares across the game. You click the square until an X appears. Don't click it again after that, because you might toggle it back off. The following slideshow provides locations for each orb in the order shown above the portal:
1/10 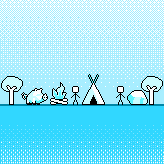 This secret's bonus is not boosted by the Smithing item, Enigmatic Boosters.

As of the new update, V2.50, you can sometimes see a ball rolling around the Raid Screen. By doing some actions with this ball, you can unlock the Hoop Challenge minigame which allows you to get gems each day.

- Drag the ball to the Exit Button. You can then see it on the training menu.

- Drag the ball to the Portal Button. Then it will be on the Portal Screen.

- Drag it to the figure that says "Lava" under it.

Note: If ball is not found on raid screen. Click the largest fish on the fishing help screen to unlock hoops.

Now, you will be dragged to a screen where Lava is on a moving platform, holding a ball and a basket to throw it in. You get 3 tries per day to score as much as you can, and then you will get free Gems according to your total score among the 3 tries. After the 3 tries, you still can throw the ball to practice, but no Gems will be awarded. If you then want to access the screen again, instead of the "Secrets" portal, you click on a new button that says "Hoops" in a corner.

Tips: The position of lava when you throw the ball is not the only factor affecting the ball trajectory. The current speed of lava is also one of the parameters. Launching the ball when lava reached max height doesn't allow the ball to go the furthest possible, instead, launch the ball a little after that to benefit from lava going up velocity.

In the asylum is a small human-like creature found to the right of Gorshank. Clicking on him prompts you to show him some resources.

After showing the creature these resources, it will give you a key. This unlocks the vamp skill on the special skill bar.

NOTE: Strafe reduce the cooldowns of other skills by 1 second every second this buff is in effect. Strafe has 10 seconds duration and 8 seconds cooldown.

The key can be found by talking to Mini Lava on the portal screen. Keep trying; He has a lot to say.

NOTE: You have to exit the portal and come back. Won't work if you keep trying at one visit.

In the tunnels, when trying to add a Spelunker, there is a golden blob in a cage.

After showing the creature these resources, it will be in your pet inventory. You have unlocked the 56th pet, the GOLDEN BOY.

Retrieved from "https://idle-skilling.fandom.com/wiki/Secrets?oldid=5902"
Community content is available under CC-BY-SA unless otherwise noted.